One fine day, 2008 March last week, we (Me, Jagga and Manu) thought we could go for a trip. We also thought we should decide the date, place and invite others instead of asking everybody for probable dates, otherwise the trip itself wouldn't have happened. We called our friends immediately we booked 4 tickets in KSRTC to Karwar (as we didn't get train tickets) for April 4th evening when only we 3 were confirmed, rest denying. Finally Deva joined us as 4th member, when none of us were aware of boarding, lodging, travelling etc., in Goa. We just googled it and found out some places and left.

It was 9 am when we got down in Karwar and had breakfast. Not knowing the train timings, we caught a KTC (Goa state transport) bus and reached Margao by around 12 noon, two of us looking at Western ghats, rest continuing sleep...

When we checked into a hotel in Margao, everybody was eager to have shower - a desperate needy at the hour. After having lunch in a Kamat hotel nearby, we set for Colva beach dressed in shorts, convenient to play in sea-waters. We played in sea, watched sunset and returned to our hotel. We used only public transport on our first day.

One unusual thing about Margao (or rather different than what we thought), is town's time to embrace the sleep. We started for dinner at around 9 pm and we walked around 3-4 km till the town's center and still we didn't get even a single hotel opened that time! Hotels, shops, market, - everything was closed for the day. We had a tough time finding to have food and finally we settled for paav bhaji, he too was packing up, which we found luckily on a roadside.

Next day (6th) we went to Anjuna beach, where Scarlett Keeling's body found just one month prior, and we got into a cottage. We changed bus once at Panaji and then at Mapusa on our way to Anjuna village. It is quite a different beach, full of dark brown rocks near shore, not usual sandy. Its also a famous shooting spot. 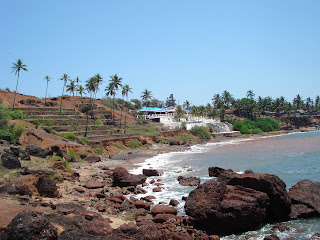 After playing for a while, We left the shore and hired two bikes. Now this is something very common in Goa - rented bikes. We asked a guy for two bikes, which he gave willingly, taking Rs 250 per day per bike, and not even bothered to ask whether we knew the driving or not, let alone DLs! When we were about to start, he told about accelerator and brake! 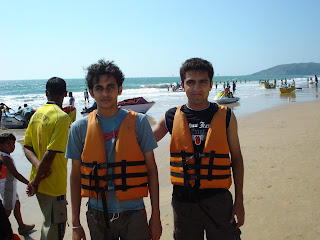 We then visited Bhaga and Calangute beaches. Those two are beautiful beaches, where we enjoyed most. We played water sports, watched sunset for second successive day, and did shopping. There is a very good veg restaurant in Calangute, (name I don't remember now, must be some 'Sagar') where we had both lunch and dinner. 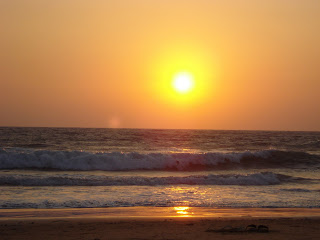 Next day early morning, we explored Anjuna Beach a little more before heading to to Panaji. As soon as we got down, probably guessed by our confusing looks, somebody came and was leading us to a hotel, the next moment! We checked into a hotel, Sona, near Panjim bus stand. After enquiring about cruise timings, we booked for that day evening's, since it was already time for morning's. 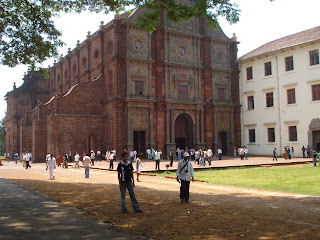 Churches enough, next thing was to visit some of the famous temples. We visited 3 famous temples - Shri Mangesh temple, Goa's one of the most prominent temples, located at Mangeshi village, followed by Mahalasa temple, another name of Vishnu's Mohini incarnation, located at Madroli village, and Shantadurga temple, which has an impressive idol of Durga, who is said to have mediated between Vishnu and Shiva and stopped their war. Goa's temples are really good and one can find the architectural similarity between them. 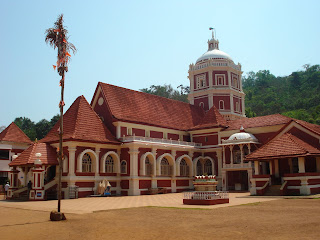 After that we went to Dona Paula and Miramar beaches, visiting 'big foot', a miniature setup to recreate the rural life of Goa's olden days. Big foot got its name because of big footprint that was discovered on a rock and the footprint is believed to bring good luck for those who stood upon it. The laterite sculpture of Saint Mirabai in Ancestral Goa has been cited in the Limca Book of Records as the Longest Laterite Sculpture in India.

Hmmm, it was time to say good bye to Deal(Deva, our friend), who had to leave us for his home. We then went on to ride cruise. In cruise they take us on the water for about an hour's ride. There will be dance and / or similar programmes on it. 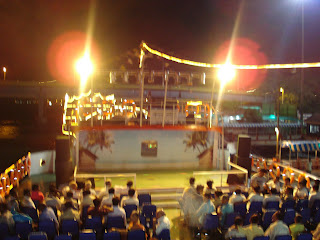 Next morning, we woke up early and before 6 am, we were at Panaji bus stand to catch the bus to Margao, from where we had to catch Konkan train (Vokha - Ernakulam Express) at 8 or so. That journey from Margao to Karwar in train was the best train journey I ever had! Though we got the seats in II class, we soon left the seat and stood in the door for our entire journey till Karwar. It averages about 120 kmph. There are so many small tunnels and 2-3 lengthier ones as well. (2-3 km long). Even inside the tunnels, dark and lit by small bulbs, the train didn't reduce the speed. The sound was horrible, when it goes inside. And we were afraid at times, seeing rocks and stones very much near to train! Wonderful journey nonetheless. It reached Karwar in 45 mins (rail distance - around 70 km or so) 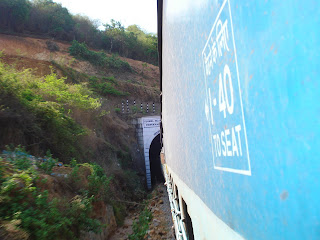 Finally we got down in Karwar and caught a bus to Talavata, (my native place) via Gerusoppa ghat on 8th of April.

PS : For more pictures, you can refer to my picasa album http://picasaweb.google.com/gowthuhk/GoaTrip#.
Posted by Gowtham at 1:15 PM 2 comments: