We were planning for the next day, i.e., 15th Aug (2008). But in the evening, it rained so heavily that made us to drop the idea of being there on the summit by 6 am. Not just that, we even dropped Nandi Hills picnic, which never came true till today!We inquired some friends and decided on Shivagange, a rocky hillock and a fantastic trekking place with temples at the summit. The place is around 60 km from Bangalore towards Tumkur. A deviation has to be taken from NH 4 at Dabas pet and travel for 8 km to reach at the base, though the hillock is visible from Highway. 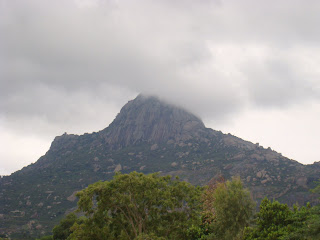 Me, Jagga and Acharya started by 9 am and picking up Manu, Prasanna and Deva on the way, all wearing jackets to protect from rain, set towards it and reached by around 11. Thanks to Varuna, the rain God. Nevertheless the weather was so nice and with clouds covering entire sky, Sun was not visible, A happy sign for trekkers. 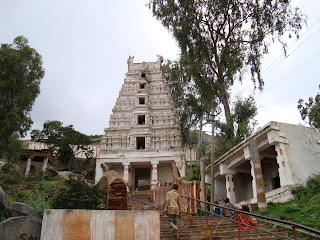 We started climbing the hillock and we struggled a lot to keep the biscuits and chips with ourselves when our so called ancestors were trying desperately to drag them away. I am talking about monkeys, which would be there in large number at Shivagange. At once it jumped at me and even opened the zip of my bag to peek inside! So daring. Its a challenge how much you can keep before reaching the summit. 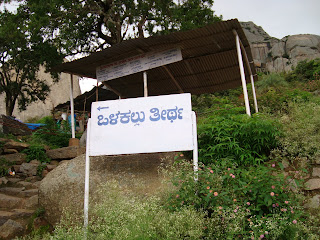 Half way, there is a place called "Olakallu Teertha", where, inside a cave, a small well with a diameter of 3/4th a foot is there. There is water in it but one has to shove his hand till the shoulder to reach the water. If he touches it, it is believed he has good luck, otherwise considered bad luck. 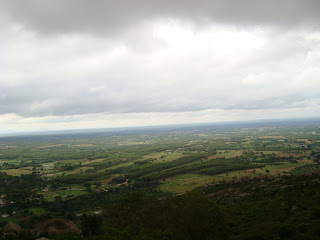 We took around 2 and half hours to reach the summit, eating cucumber, watermelon and drinking buttermilk on the way, including testing our luck by reaching water inside the well. The scenery is so fantastic and fabulous that I can never forget, at least in the near future. There is a suicide point also and a kannada novel refers it to as "Shantala's suicide point". I am not sure but I guess a character named Shantala committed suicide by jumping down in the novel at that place. 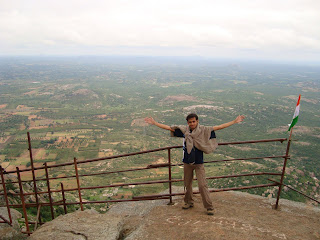 After photo sessions, we climbed down, which took an hour and a half approximately. But Varuna thought he should not keep quiet and heavy rain started pouring when we just started our ride and not even reached Dabas Pet. Finally, when it sl0wed down we resumed towards Bangalore and reached not before having snacks at Kamat hotel, Dabas Pet. 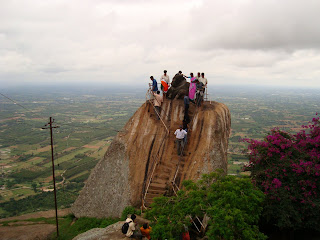 For more photos please follow this link http://picasaweb.google.com/gowthuhk/ShivagangeTrip#
Posted by Gowtham at 8:05 PM No comments: