It was a Sunday evening, 24th April, and while sipping afternoon coffee, me and my wife thought of going to Pyramid Valley. Pyramid Valley is the world's largest meditational pyramid. However, we went not because to meditate instead to see the Pyramid itself. I am always interested in architecture, as I have said before. It is at a distance of around 28 km on Kanakapura road. The website has all the information.

When we reached Pyramid valley, it was cloudy and dark and we expected heavy rainfall any moment. At the entrance there is a map of the campus and we were asked to enter a hut like structure beside main reception. There a guy would explain what is meditation and its advantages in about 10 minutes. After listening to meditation tips, we came outside and walked towards Pyramid. 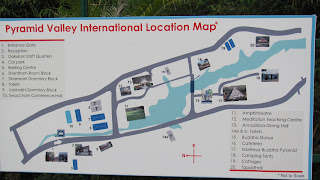 Pyramid, called Maitreya-Buddha Pyramid, has a base area of 160x160 ft and with height of 102 ft. Its external surface is covered by murals depicting various nature elements. It has a capacity of around 5000. There are beautiful murals and art work of Buddha in the lower hall, to remind him for his meditation techniques. It is said that the geometric design of Pyramids collects, radiates and stores cosmic energy and thus meditation done inside a Pyramid is thrice more powerful. 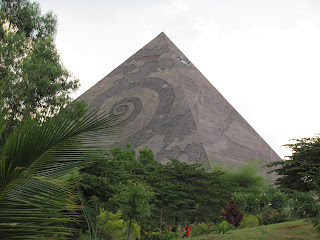 We sat quietly for sometime in Pyramid. There were many people meditating. Some were sleeping, though we were not sure whether they went to that state meditating or just that they were sleeping in pin drop silence.
We started back sometime later just when heavy rain started pouring on us. 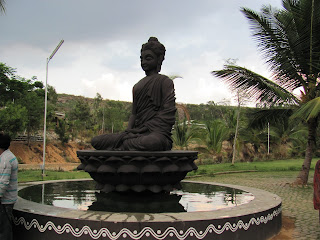 For more information on Pyramid valley, click here.
Posted by Gowtham at 7:00 AM 5 comments:

During Ugadi festival time, we had been to native and decided to go for a day's trip. My brother wanted to go to a beach. Only me and my wife had seen Yana and no one else had. So we planned to visit Yana and go to Kumta for lunch and then head to Betthageri beach for sunset and return home.

It was a Sunday, 3rd April, and we were on our way to Yana. Yana is a village in Uttara Kannada district amid Sahyadri hills (Western Ghats) range with presence of huge unusual rocks. These rocks are formed of crystalline limestone. There is a popular saying in Kannada "Sokkidre Yana Rokkidre Gokarna", meaning, one needs quite a bit stamina to trek to Yana and needs quite a bit money to reach Gokarna, since, for outsiders, Gokarna would be expensive enough. But today, this saying is not applicable for both of the places! After Kannada movie "Nammoora Mandara Hoove" (1997), Yana became more famous and now there is a tar road, going very near to Yana and the trekking distance is reduced to only half a km. 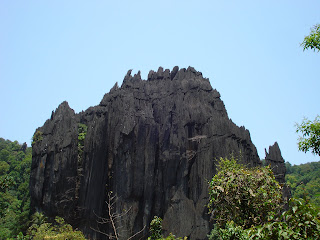 We reached Yana via Sirsi, and taking Kumta road, soon followed by taking a deviation to the right. The distance from Sirsi is around 40km. We first visited the temple, a Shiva temple. For "Pradakshine", one needs to go inside the gigantic rock. The path inside resembles cave and there are a couple of small rocks hanging in the narrow space in between the rock. We had tender coconut, banana before resuming journey to next destination. 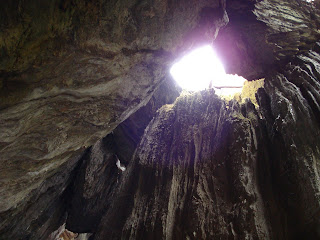 There are two roads from Yana to Kumta, our destination. One route is via Mabage village and waterfall, called Vibhooti falls. I had been to there and have had a blog posted about it. Click here to read. The other route is taking the route towards Sirsi and take a deviation to Manjuguni after about 20km, which would join to Sirsi-Kumta road. We took the former route as it was nearer, 48 km. One can find many pages in internet about the distance from Yana to Kumta mentioned as approximately 25 km. But this is wrong and via the shortest route, Kumta is at a distance of 48 km from Yana. However, from Yana till Mabage the road is very bad with jelly (crusher stones) and to travel 7 km on empty road, we took more than half an hour! We had some food, packed from home, and went to Kumta. After a pit stop for coffee/snacks, we head towards Honnavar and took a right for Betthageri beach, roughly 10 km from Kumta on NH17.

Betthageri beach is very clean, as it is still remote. When we went there, there was nobody else, though some people came after us from neighboring villages after sometime. We played for an hour in the beach and just when the Sun started to set, it became cloudy and though we got nice views, we didn't get nice sunset! 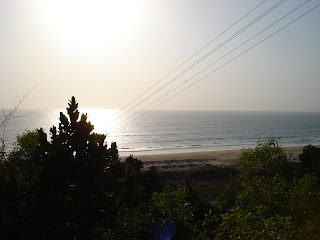 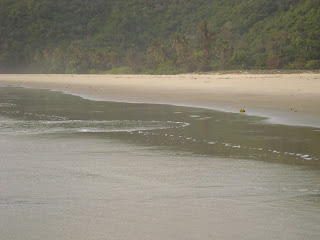 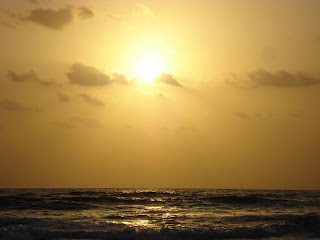 We returned to home from there via Honnavar and Gerusoppa. It was a wonderful trip with full family after a long time.
Posted by Gowtham at 2:21 PM 5 comments:

When my in-laws came, we planned to go for a day's trip to Mysore. After estimating time for travel and food, we finalized 3 places - Srirangapatna, Mysore Palace and KRS.
Thus planned, we started at around 8 AM on March 19th, 2011. At hotel Kamat Lokaruchi, Ramanagara around 9 30, we stopped for breakfast and proceeded towards Srirangapatna and reached around 11 AM. Asking the route, we went to Sri Ranganathaswamy temple. There was an incident involving the priest regarding a photo taken inside the temple where photography was prohibited. Click here to read that. 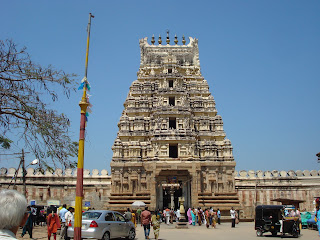 Anyway, we came outside and went to Tippu's summer palace. Sri Ranganathaswamy temple is to the right if traveling from Bangalore and Tippu's summer palace, also called Dariya Daulat, is at the right side. The signboards are pretty well. The architecture of Dariya Daulat is beautiful. Photography is prohibited there, so couldn't capture in my camera. It is now converted to museum with many of Tippu's household stuffs, clothes, various portraits and photographs of his children, battle ground, fort and things like that. 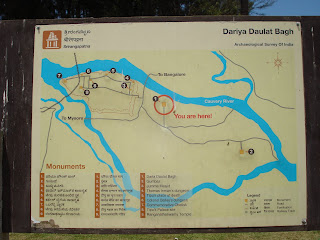 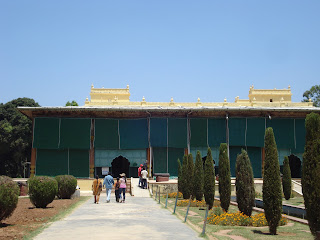 We went to Gumbaz afterwards. Gumbaz is burial ground of Tippu's father, Hyder Ali. Now, one can find tombs of Tippu, his father, mother, wife and children there. 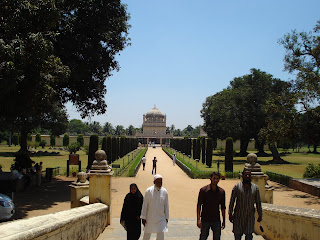 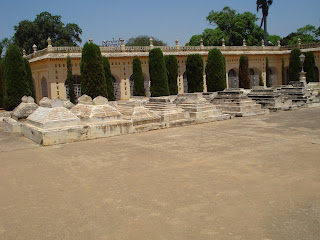 Our last place of visit near Srirangapatna was Sangama, which is the confluence of two branches of Cauvery. Of them, one is called Lokapavani and it is considered to be holy to take a dip and bath there. Many people give tribute to their demised parents at Sangama. However, we didn't like this place since somebody was worshiping and just beside that some fishermen were cutting fish into pieces!


We started from Srirangapatna and went to Mysore. We had lunch in a hotel near Palace and went inside Palace. Wow! I had never been to Mysore Palace, though had seen bits and pieces in media, and I liked it very much. A tour inside Palace along with nearby museum (then Palace before current Palace was constructed in early 20th century) took almost 2 hours. The architecture of the building (referred as Indo-Saracenic), a stoned structure, numerous photos and description beneath them, which tell us the story in brief, the gifts the wodeyar dynasty received, their household items - overall, it was fantastic. 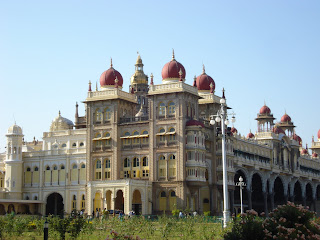 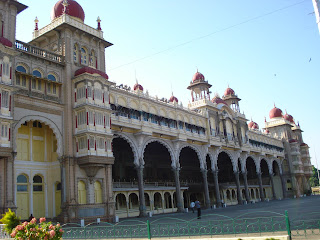 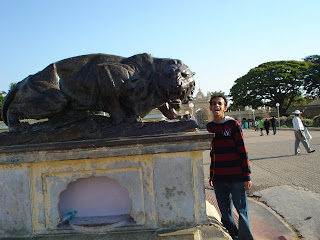 We strolled for sometime, spending time in taking snaps, outside the palace and we left for KRS. Parking arrangement at KRS is good. I guess it is constructed recently. It was around 6 PM when we reached there. We took a walk and climbed up the dam to see the backwater and came back. It was 7 pm then and the lights were turned on, feasting our eyes. We started taking quick steps towards musical fountain, taking snaps all along and of-course exclaiming what we see. It took us almost 20-25 minutes to reach and watch musical fountain. We watched for some 15 minutes and we started back since we had to come all the way to Bangalore. KRS provided us an amazing sight and we had a great time enjoying there. 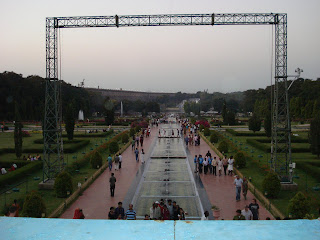 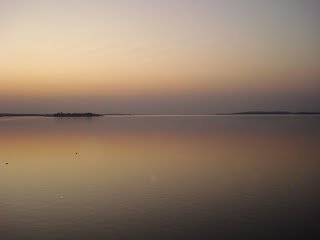 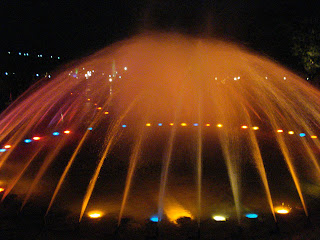 We reached Bangalore-Mysore road at Srirangapatna from KRS and from then, it was one stop journey at Kamat again for dinner before we reach home in Bangalore at 11.
Posted by Gowtham at 11:00 PM 2 comments: