One of my friends was getting married on August 15th (what a co-incidence!) at Hassan. We planned to go by car on 14th morning itself and visit some places near Hassan. Since all of us had been to Belur and Halebeedu, we finalized on 3 places to visit. Shravanabelagola, which is just a few km off Bangalore - Mangalore highway (NH48), was the first one. 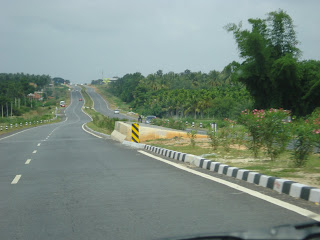 Shravanabelagola town is situated between two hills Vindhyagiri and Chandragiri with a tank in between, namely, Belagola meaning Bili Kola or white pond. Shravana or Shramana means Jain ascetic, meaning, lifestyle practiced to pursue religious and spiritual goals avoiding worldly pleasures. The town is named after this Jain ascetic and pond. The place is a Jain pilgrimage center as there is 57 feet monolithic statue of Gomateshwara on southern hill, Vindhyagiri facing North. 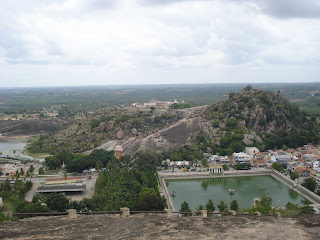 The statue, center of attraction, is the tallest monolithic statue in the world. The statue is carved beautifully as if anthills surround it and creepers encircle up to thighs. According to the information available, it was installed by Ganga King Rachamalla Sathyavaka's minister Chavundaraya in 988 AD. Gomateshwara or Bahubali was a son of first Jain Thirthankara, Purudeva. He was transformed after he won the fight for kingdom fought against his brother Bharatha. 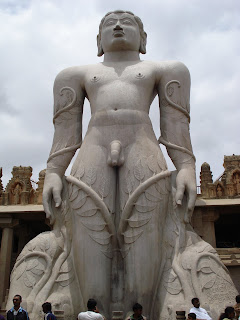 When we left Bangalore it was 9 am and we stopped for breakfast at Hotel Mayura, Ballur cross. It was very expensive and the service was slow. From NH48, we turned left to Shravanabelagola at Hirisave, roughly 125 km from Bangalore. From there, it is 18km. 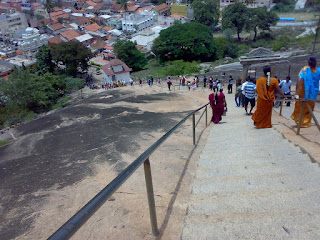 We trekked amid hot Sun and visited Basadis on top of the hill and tried our luck to encircle Thyagada Kamba, a pillar and if one encircles by his hands it is believed to be a lucky symbol. On our way up, we saw a lot of people climb up 2-3 times to offer some religious vows, many a times, holding children. After circling round the statue, seeing all 24 Thirthankaras and overwhelmed by the Majestic statue, we took some snaps of the inscriptions and started back. 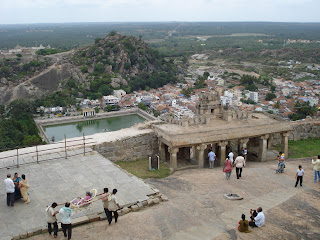 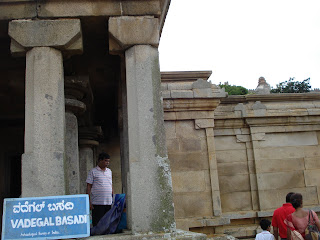 We climbed down, had tender coconut water and started towards Channarayapatna, at a distance of 11km, (different road than the one towards Hirisave) and from there to Hassan.
Posted by Gowtham at 2:00 PM 8 comments:

"We must go somewhere outside Bangalore", my friend called me. It was already 10 am and we had just finished breakfast. I quickly considered quite a few options and decided on Anthargange. Following a blog by someone I don't know, I thought it would be a nice trek with caves on top of the hill. But little did I know my plan would be ruined that day.


By the time we got ready and leave the Bangalore, it was nearing 1 pm. We didn't stop till a Shanti Sagar on the outskirts of Kolar. We had lunch there. It was good until my wife got a cockroach free with the lunch!
We almost finished our lunch, so we started towards Anthargange querying the route. I do not write the route here since we took too many alternate routes as many roads were dug up in Kolar. Finally we got a tarmac road to Anthargange, but by then, it was cloudy and very dark. Time was around 3 pm.

We reached Anthargange and parked our car. There is a police substation and a constable at the base from which there are steps to temple at a distance of approximately 300mts. He noted down everybody's name and sought address in detail. When I inquired about caves, he said there were no caves. We should not go beyond temple. There was a hillock range but it was the place of leopards There would be illegal activities going on and family people should not go. etc., To add to our dismay, drizzling started. Bottom line is our plan to trek and see the caves was shattered. 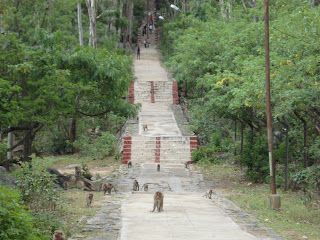 Anyway, being come so far, we thought of visiting temple atleast and return. There are too many monkeys in Anthargange. They literally attack each and everybody for the reason they only know. One monkey came and it almost attacked my wife and she, in order to escape, gave her bag to it. Monkey was confused on getting the bag without much effort, so it sat upfront scratching head. By then my wife realized her mistake and told our home key, wallet, everything was in the bag.

Now, it was our turn to attack the monkey and get the bag back. It was groaning but still sitting in front of us. When I tried to snatch the bag it tried to hit me and I took back my hand quickly. My friend was holding a stick with a lot of leaves so I told him to shove towards it. When money turned towards it in defense, I snatched the bag, this time very quickly. After that, we climbed up hurling sticks at monkeys. 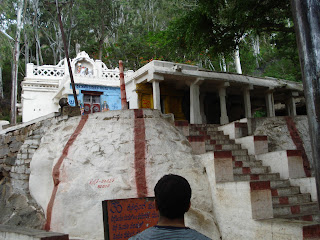 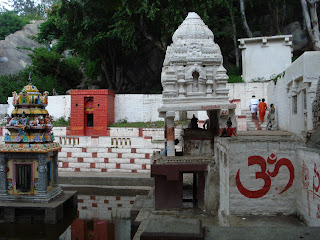 We had not even reached the temple when heavy rain started pouring. We stood there for sometime watching rainfall. It was 4 30 pm when we got back to car and drove towards Bangalore. 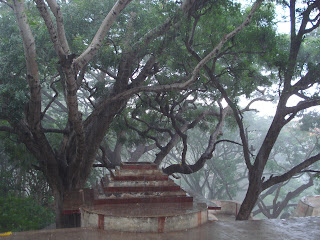 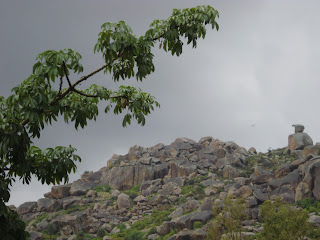 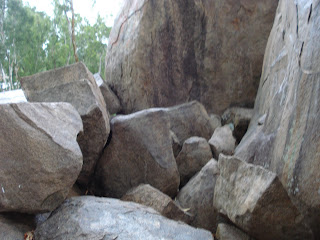 I plan to visit again with proper route map to trek and reach the top and caves.
Posted by Gowtham at 2:30 PM 12 comments: