Bluff or Shimsa and Talakadu

After our graduation, we, classmates, had never been to any place together. So somebody suggested and everybody else agreed to visit Shivanasamudra and we went there on Jan 31st, 2009.

Actual name of Bluff or Shimsa is Shivanasamudra, which has two waterfalls namely Gaganachukki and Bharachukki. At Shivanasamudra, river Kaveri branches off into two and drops over cliffs forming multiple waterfalls. We went to Bharachukki and left out Gaganachukki as we prioritized visiting Talakadu than Gaganachukki. The hydral power plant in Shivanasamudra is first in Asia! From Bengaluru, there are two ways to reach bluff. One via Maddur -> Malavalli from Bengaluru Mysuru road and the other one is via Kanakapura->Malavalli. Distance is almost same but first one is better as the road is good. 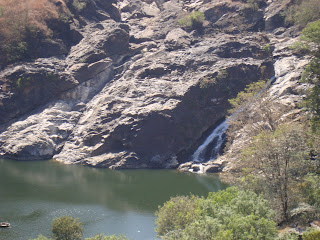 Having breakfast in Kamat hotel, Ramanagar, as usual, it was around 11 am when we reached Bharachukki. Unfortunately, our time of visit was not very good as the water at this time of the year would be less. But who goes only to see the beauty, we were to enjoy the trip after all! Coming back to the day, we climbed down the hillock and reached the bottom. To go below the falls and to play most in water we hired 'Teppa', (Raft or ferry, I don't know what it's exact counterpart in English). Getting soaked in water after sometime was giving us lot of cheerfulness in that heat. After playing in the waters for about an hour we were back to land and started for Talakadu. 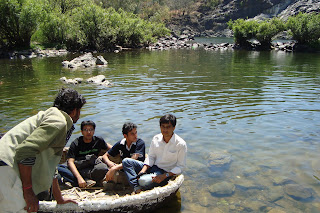 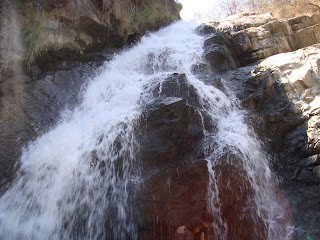 Talakadu, full of sand, is a small town beside river Kaveri. It has great history and buried underneath in sand are 30 odd temples! It is also associated with the "curse of Talakadu" by Alamelamma. She cursed "Talakadu Maralagali" along with two more curses which include "Mysore Wadeyar may not have children for all time". Almost everybody in Karnataka know about these and I don't write anything more. 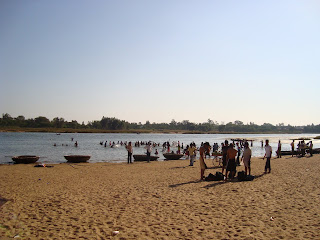 Talakadu is a very good place to hang on for some time with family and/or friends. We spent sometime along the river shore after taking a round to the other end in Teppa. This time instead of rowing, they were just pushing with the help of a long bamboo pole. When we asked the depth, the guy told it's just 4 feet! If we knew this earlier, we wouldn't have given him Rs 100 just for taking us otherside of the river once. 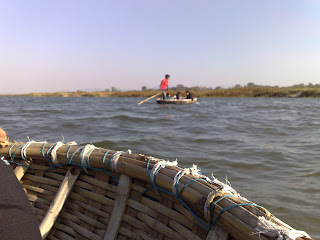 The most funny part followed this. One elderly lady volunteered herself as a guide even when we were refusing. Then she started addressing every one of us as "PuTtamma, Chinnupaapu, Ganesha, ... ", and so on and particulary one of our friends Seena, who got very close to her in that short period and was pity about her. She not even closed her mouth for a second and we were just making fun of her. 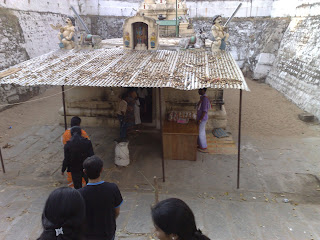 It was getting dark and we started from Talakadu at twilight hour towards Bangalore and had something in Kamat hotel, Ramanagar once again!
Posted by Gowtham at 6:30 PM 2 comments: