We had bought a Godrej refrigerator in last May from Girias, Majestic. That time, there was some discount and they gave two package passes, each worth 699/-, for 2 persons, meaning, 4 people could use. When my parents came from native, we decided to use it, on September 25th, last year. 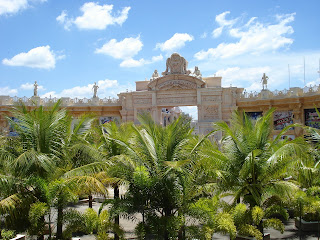 It was a Saturday and we reached Innovative film city after traveling 35km on crowded Mysore road by 11 30. After exchanging passes with tickets, we visited Innovative Talkies. Innovative talkies shows some of the old movies for 10 mins. The talkies is made to look like very old with wooden benches and iron chairs. We watched some shots from "Sholay" before moving on to Wannado City.
Wannado City is a role-playing theme park, a designed city where a child can play a role of a firefighter, actor, TV reporter, chef, judge, pilot doctor ... One can even become a thief and go behind the bars!
We next moved to Mirror Maze. This was very good. All the rooms had only 3 sides with 2 walls angled at 60 degrees to the adjacent ones. One actually have to find out the way and move to next room. All the fun was in finding out the way to the next room.
Our next point was Dinosaur world. There are artificial dinosaurs. They move, they roar! This was worth visiting. Different species of dinosaurs along with sub groups are present there. 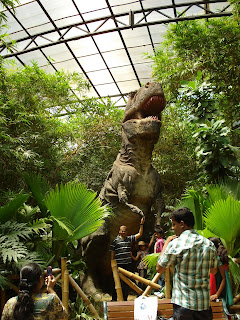 Our next stop was Fossil museum. Fossil museum gives an insight to the fossils of dinosaurs with information of various dinosaur fossils displayed. More the time, more the information can be gathered here! 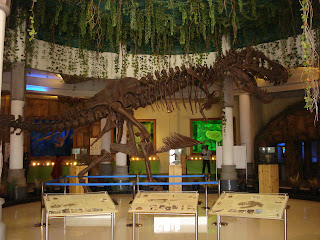 Ripley's Believe It or Not museum was our next visit. Robert Ripley discovered a lot of unusual, odd and unbelievable stories while exploring in over 200 countries. The museum houses a part of these stories with bizarre exhibits on display. Here also more time is needed to read out all those stories. 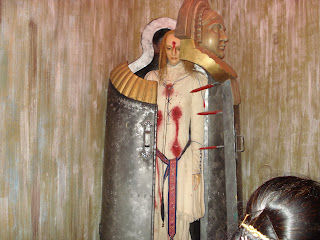 We continued further to Louis Tussaud's Wax museum. This has statues of well known personalities around the world. The statues were realistic. 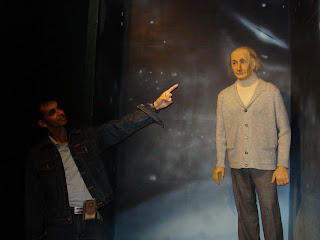 Time was running out and we proceeded to play for sometime amid hot sunlight. We played Golf though we didn't enjoy much. Not having extra clothes prevented us from jumping into Aqua Kingdom, which is nothing but an artificial beach, a good one, particularly in summer.
Most enjoyed game was Roller Coaster. This was fantastic. All the fun can only be experienced but can neither be explained nor be written.
Finally we visited miniature city before departing. It's like a portrait of a real city. 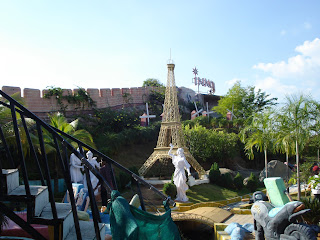