On our way back to Bangalore from Chitradurga, a fantastic fort visit, we saw the signboards leading to Vani Vilasa Sagar dam by Karnataka Tourism Dept. We had time and steered the car off NH4 towards the reservoir at Hiriyur, 40 km from Chitradurga. The dam is around 15 km on Hiriyur - Hosadurga road but boards (in Kannada) takes there without any confusion. 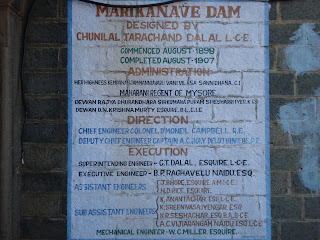 Vani Vilasa Sagar dam, also called Mari Kanive, is truly an architectural wonder. I have been numerous dams in Karnataka and according to my opinion, this reservoir is most marvelous engineering creation. The two mantapas or pavilion halls built on the two ends of the dam are constructions to watch. While I took a look at the halls, I forgot to take the snaps. The view points on the hillock at the other side leading on top of the dam provides a fantastic view of the forests and wind mills beyond the water. 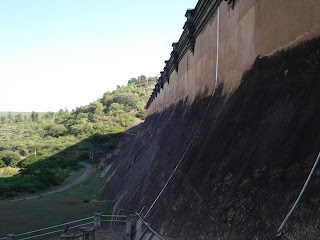 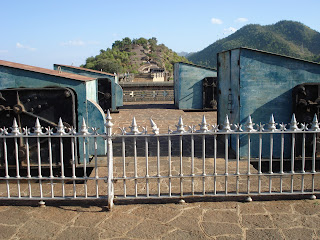 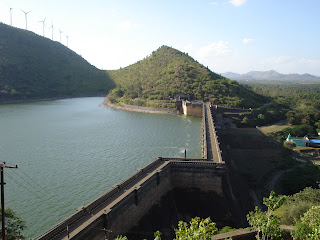 Vani Vilasa Sagar dam was built by an engineering team headed by Tara Chand Dalal on the order of his king of Mysore, Sri Krishnaraja Wadiyar IV in early 20th century. The Mysore king had to pledge some royal jewellery due to shortage of money and hence it was called Vani Vilasa Sagar. Vani Vilasa was the name of the youngest daughter of the Mysore king (source: Wikipedia). The dam, built across the river Vedavathi, measures 162ft by 1300 ft and is the source of domestic water for the nearby towns Chitradurga and Hiriyur and is the source of water for agriculture for Hiriyur and Challakere taluks through canals on the both sides of the dam. 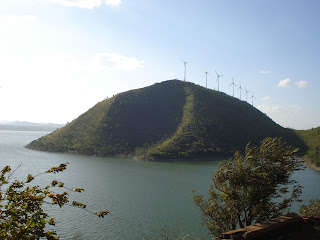 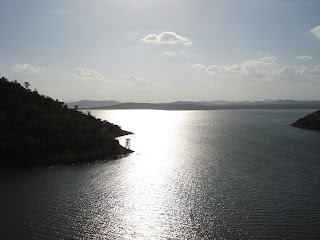 It is a good picnic spot and one can spend a couple of hours with family.
Posted by Gowtham at 7:00 PM 8 comments: